Pokemon Go is the latest viral trend that’s sweeping the world. It is a free-to-play, location-based augmented reality game developed by Niantic. It was initially released in selected countries but is now available in more countries. The game is played using the mobile device’s GPS to find, capture, battle or train virtual creatures called Pokemon. They appear on the screen as if they were in the same real-world location as the player. It received mixed reviews but quickly became a global phenomenon and became one of the most used mobile apps with a download count of 100 million worldwide. In just a week it has become the most used app on the planet even passing Twitter!  Obviously, like any other trends, there are going to be people who will push the limit. Pranksters and daredevils alike have all found unique ways to play this game. Here are the 18 Unimaginable Places People Have Caught Pokemon. 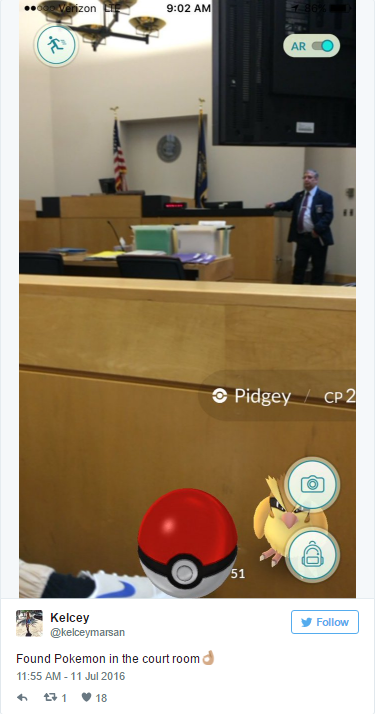 We’re not sure what Kelcey was doing in the courtroom but we all know for a fact that it could get pretty boring in there. So her remedy? She pulled out her phone and played Pokemon Go! What else could she be doing that’s fun and entertaining right? And we’re just as surprised as she is to find a Pidgey in the courtroom. The judge could be taking a while to make her verdict but Kelcey’s got it all covered.

Caught on Camera: 29 Most Embarrassing Moments of this Decade